The first chapter focuses on what I call the Itinerary Cups, which have been dated between the first century BCE and the fourth century CE. These four silver vessels were excavated from a sacred spring at Vicarello, near the northern shore of Lake Bracciano. Each cup was engraved with an itinerary linking Cádiz to Rome.  Each of these so-called Vicarello Itinerararies lists about a hundred stops, including some of the empire's most opulent and charming cities (see Key Destinations below). Itineraries facilitated mobility and help us imagine how the empire's many different landscapes and cityscapes were experienced on the ground. Itineraries were not typically engraved on silver vessels, and silver vessels were not typically decorated with so much text (see Comparanda below). These cups are valuable both for the history of itineraries and for the history of design.

For a preview of the destinations, take a look at my blog post with tips for a Roman road trip.

The Artifacts on Display

The Itinerary Cups can be found in the Palazzo Massimo building of the Museo Nazionale Romano in Rome. They are displayed there in the basement along with other finds from the spring. Around them is the museum's vast coin collection, and all of these items have material value. Their basement location ensures their safety, but unfortuantely keeps them far from the paths of most visitors. 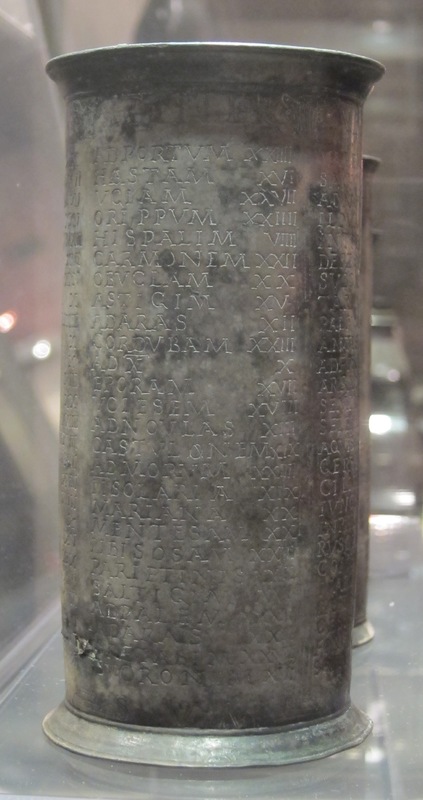 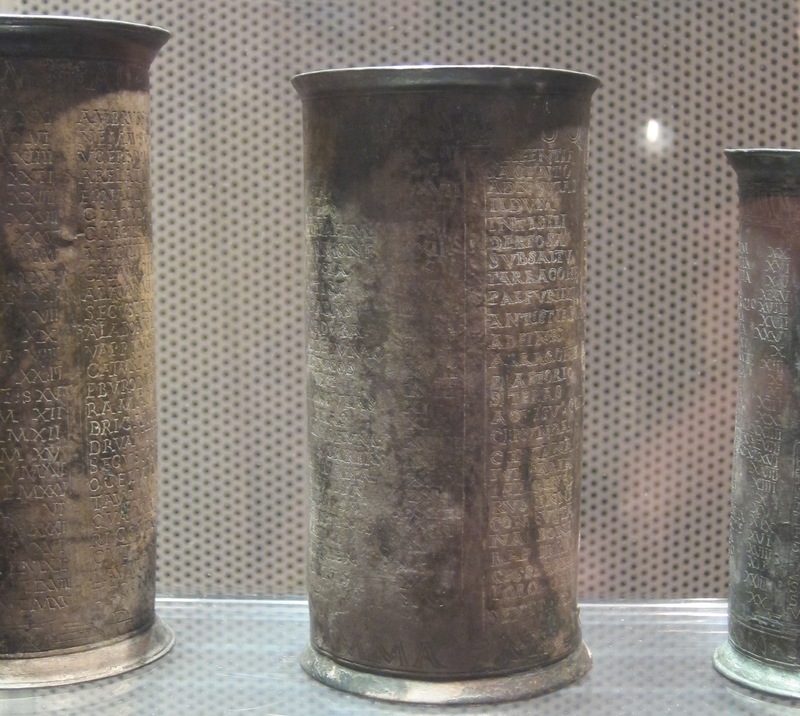 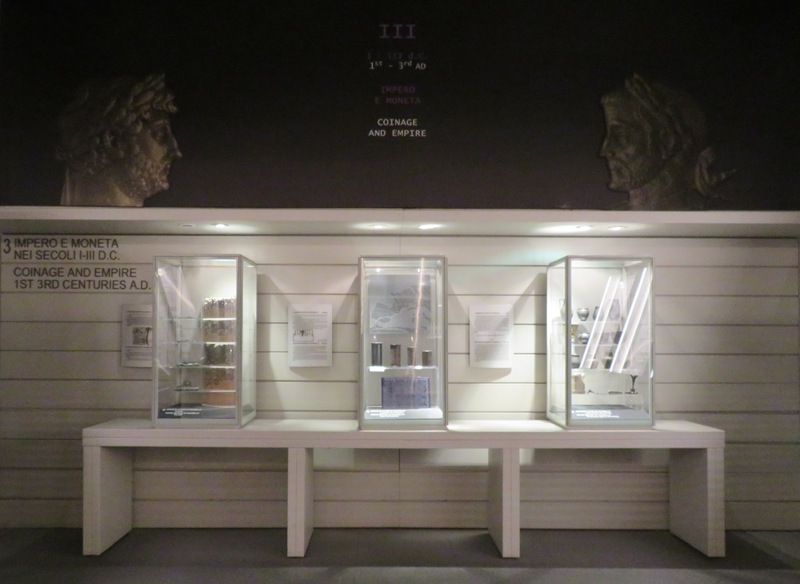 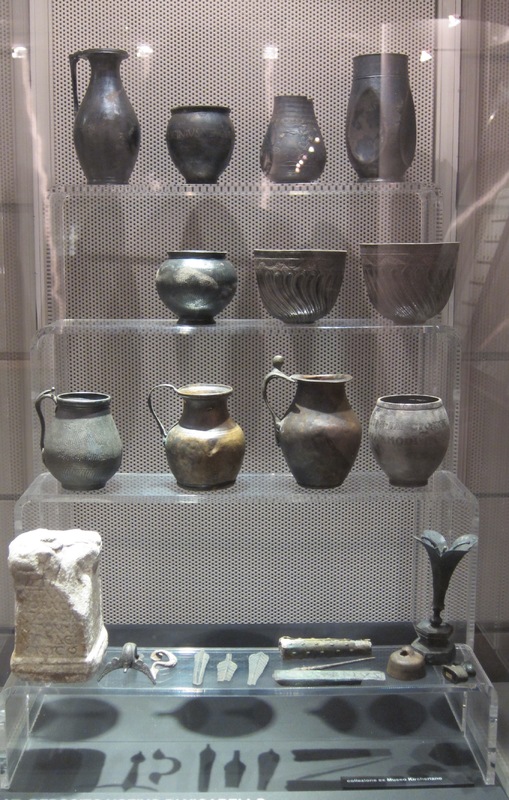 other finds from the spring at Vicarello

The sites linked below all appear in the cups' itineraries and have Destinations pages on this site. Each page features key landmarks as well as highlights from local museums, all intended to inspire further exploration. Below, they are listed in the order you would encounter them if you were following the cups' itineraries. If you prefer an alphabetical order, just click the menu icon in the upper right corner of this page.

Sections of many Roman roads survive, as do itineraries directing journeys. Both have benefited from online mapping projects. Jeffrey Becker, for instance, has mapped one of the Vicarello Itineraries on Recogito. The Pleiades Gazetteer now has entries for both cities and roads, including the Via Augusta, the Via Domitia, the Via Aemilia, and the Via Flaminia, roads which anyone following the Vicarello Itineraries would have used. Stanford University's Orbis Geospatial Networking Model of the Ancient World allows users to map hypothetical journeys from one place to another. If you want to explore the topic of roads and itineraries further, I recommend the work of Kai Brodersen, Anne Kolb, Benet Salway, and Richard Talbert. If you're wondering why Romans used itineraries rather than pictorial maps for travel, these authors delve into the details.

In modern English, the word "milestone" refers to a transitional moment: reaching a certain birthday or achieving a certain goal. The word also refers to literal milestones. Called miliaria in Latin, they were set up to mark miles along Roman roads. Their utility is debated. It doesn't necessarily help you find your way to know who set up the marker and that you're at "mile --," but those are typically the only two pieces of information provided. Milestones are nonetheless key to the visual culture of mobility: experienced travellers would expect to see them on major roads. They matter for the book because the Itinerary Cups have been thought to resemble milestones in their shape. Below are some of the milestones I encountered during my research. I illustrate the first one in the book (with the fire extinguisher cropped out). 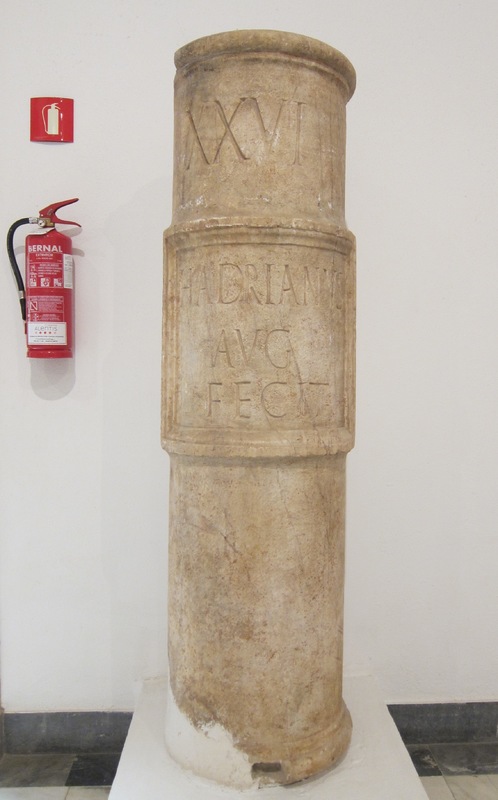 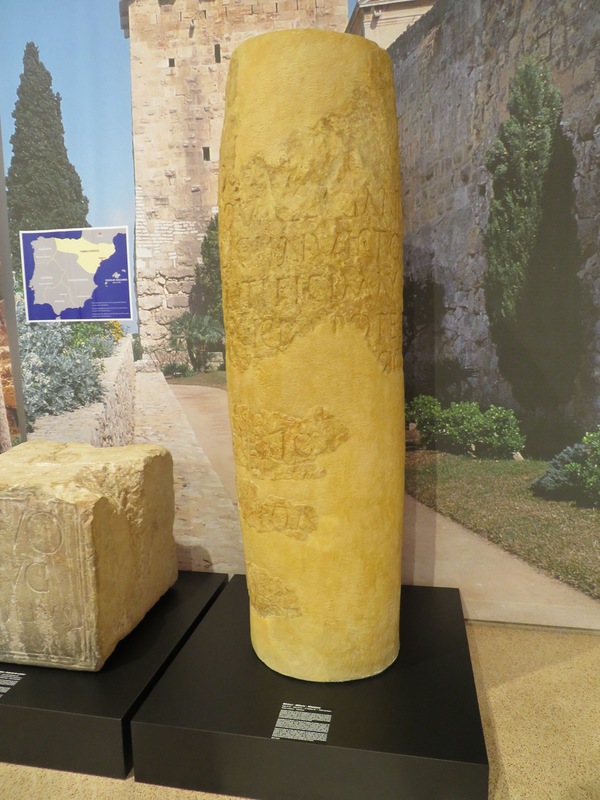 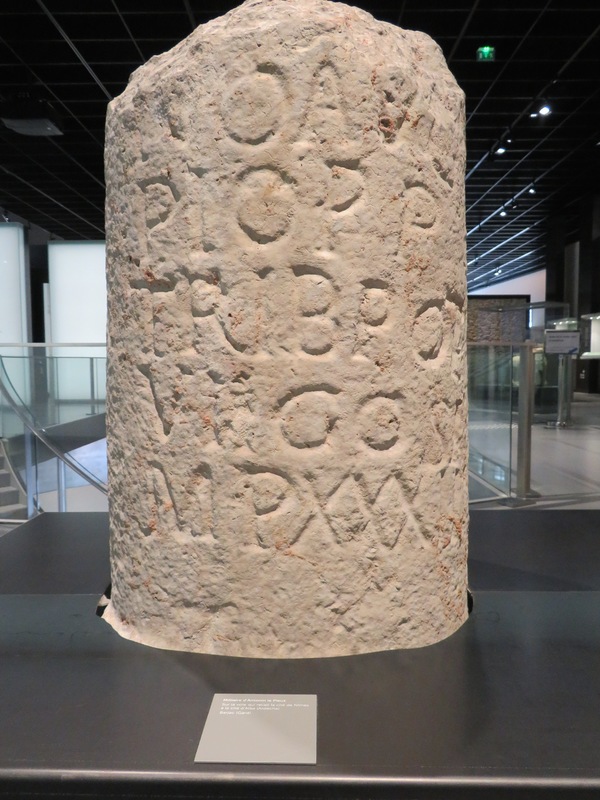 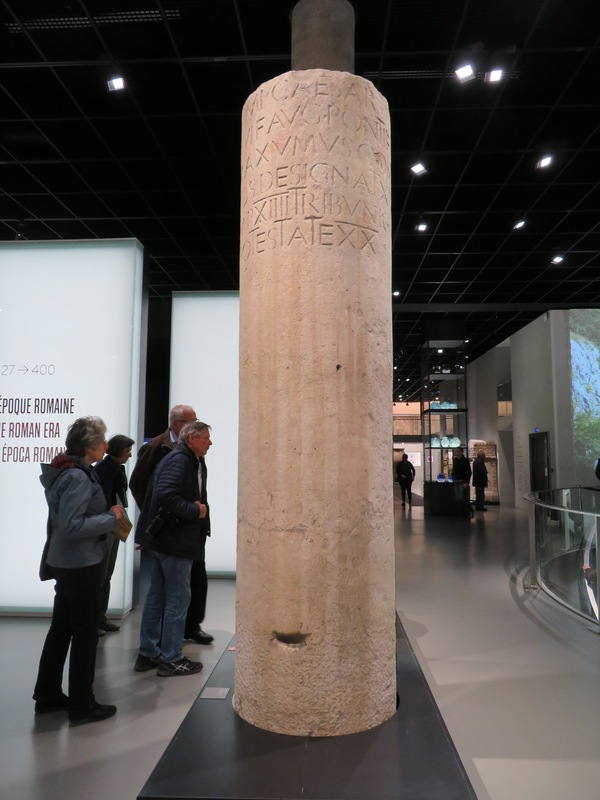 The Boscoreale treasure, now held by the Louvre, has good examples of more typical designs for silver vessels. From that treasure, I illustrate the Skeleton cups in the book and to the left. Also worth a look are what I will call the Emperor Cup 1 and Cup 2; Animal Cup 1 and Cup 2; and Cupid Cup 1 and Cup 2. I'm especially fond of the Textured Cup.

The Berthouville Treasure, found in France and recently conserved by the Getty, also illustrates the range of designs possible for silver vessels. They Getty has a short video on how to make a silver cup.

Bonus: A Pedestal with Placenames 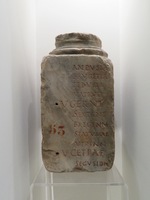 When I visited the Nîmes archaeological museum (the Musée de la Romanité), I found a small column base inscribed with the names of nearby towns. I don't discuss this artifact in the book, but I find it fascinating. Just a few inches tall, the small base requires viewers to come close for reading. It doesn't grab your attention from a distance the way that a milestone does. The architectural form and the weight of the stone prevent the artifact from being mobile in the way that the Itinerary Cups were. It's an in-between artifact: neither a grandiose public monument, nor a hand-held souvenir, but nonetheless invaluable for understanding local perceptions of urban networks.